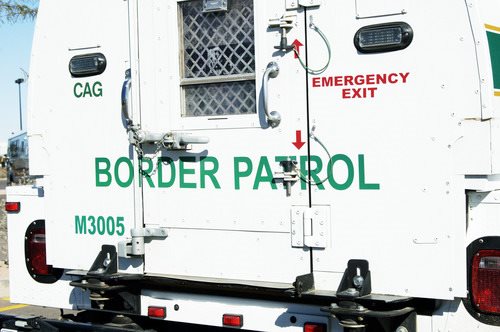 The Border Patrol has a variety of uniforms that they wear, depending on their rank and job specialization. They have dress uniforms, ceremonial uniforms, rough duty uniforms, and insignias, which are logos on the collar of their shirts according to rank; they are arranged in order from one star to four as well as other designs. Insignias will tell an individual the title and rank that the other individual holds. Border patrol hats differ from uniform to uniform as well.
The dress uniform is the patrol uniform with fatigue-green pants with a blue stripe running down the leg. There is also a fatigue-green shirt; this shirt will sometimes have shoulder straps that are blue. The border patrol hat that is worn with this uniform is called a campaign hat.
The ceremonial uniform is like the dress uniform, although some added accessories are required . An olive green jacket with blue shoulder straps, cuffs, and a tie along with white gloves are added to the dress uniform to make it a ceremonial uniform. The border patrol hats that are associated with the ceremonial uniforms are campaign hats that have leather bands; these border patrol hats are also the same green as the actual uniforms.
The rough duty uniform is called this because of the duties that are often performed while wearing it. The rough duty uniform is worn when doing the difficult day-to-day tasks that border patrol agents perform. This uniform is simple and consists of olive green cargo pants and a work shirt; depending on the weather, the shirt may have long or short sleeves. The border patrol hat that one is required to wear with the rough duty uniform is usually a regular matching green baseball hat.
There are other things that one may be required to wear. Different border patrol hats and shoes in coordinating colors such as blue or black may be necessary at times. The border patrol uniform, along with all accessories such as border patrol hats, will soon be updated for the first time since the 1950’s. The request is for the uniforms to copy a military style rather than those of the police force. Eventually, hats assigned to border patrol agents are expected to change as well.
Insignias change depending on the rank and job requirements of the individual. Each job title in different locations possesses different insignias. For example, the Chief of the Border Patrol – one of the top border patrol positions – who is located in the Border Patrol Headquarters has an insignia that consists of four silver stars on the collar, as well as a gold plated shoulder ornament.

All About US Government Passport Offices