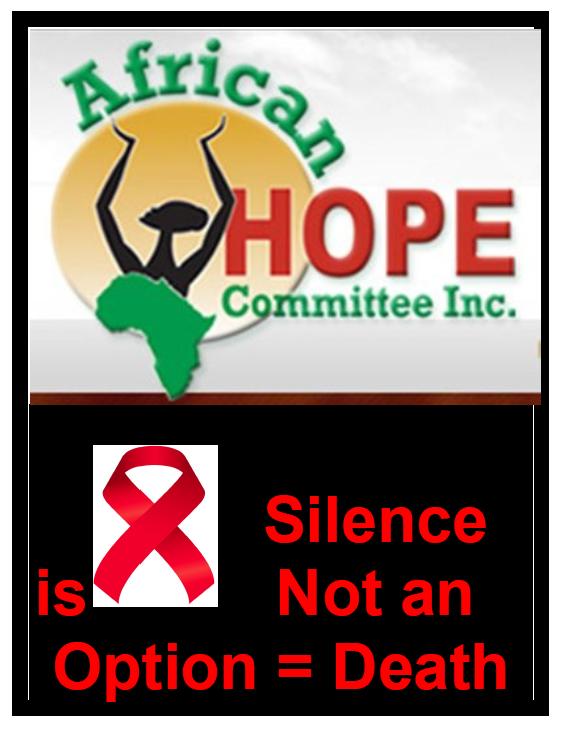 The HIV/AIDS epidemic has claimed more than 30 million lives as of 2009. A pandemic, it has affected every region and every country on the planet. According to the CDC, more than 1.1 million people over the age of 13 are living with HIV infection in the United States as of 2009. Annually, 50,000 more people get infected in the United States. Members of all racial and ethnic groups are represented among the newly infected, however, Black and African American men and women had an incidence rate that was 8 times higher than the incidence rates among Whites.

One Organization that is among those leading the fight against HIV/AIDS at the grassroots level among the Black and African community is the African Hope Committee (AHC).

Among its largest efforts to combat the disease is its annual “Silence is Not An Option” campaign to help create awareness around the topic of HIV/AIDS and eliminate taboos and stigmas around the disease in the Black and African Community.

In the following interview conducted by laws.com with AHC Founder and Execuitve Director Clarisse Mefotso, Ms. Mefotso talks to us about the campaign, its goals and its strategies and how you can help.

What is the “ Silence is Not An Option” Campaign African Hope Committee is raising funds for?

Raising  funds for  African Hope Committee’s “ Silence is not an Option”  is a very honorable and worthwhile cause especially for the African Immigrant community here in our nation and abroad where less resources are provided or given to bring the people infected or affected into care for testing and to seek proper treatment. Right at this moment, AHC lost most of its founding that cover “ The Nguemne HIV/AIDS Impact Initiative” whose goals is to increase awareness around HIV/AIDS and provide education and information in the African and Black community.  Therefore, as a non for profit organization we are really grateful for every penny and cents the organization will receive to help continue to increase HIV/AIDS Awareness and launch a successful campaign“ Silence is not an Option.”

This is the fifth year the campaign is running. How much was raised over that period and what did the campaign help accomplish before?

“Silence is not an Option” was created in 2008 during AHC Annual Health summit on HIV/AIDS. Before the campaign was created, the Annual Event “ Women/Children Affected and Infected by HIV/AIDS”  raised over $ 300.000.00 for 6 years. At that time the Annual events were supported by The MAC AIDS Funds, New York Foundation, New York Women Foundation, Until There is A Cure, Pfizer, Bristol-Myers Squibb, GlaxoSmithKline Pharmaceutical, GILEAD Sciences Inc., Roche Laboratories and many others  joined to fund the events to increase HIV/AIDS awareness in  the African community in New York City and in the Nation . Over the years,  New York City Elected Officials including State Senator Bill Perkins, Councilmember Robert Jackson, Brooklyn Borough President Marty Markowitz and Mayor Michael Bloomberg have joined in and signed proclamations to AHC for raising awareness about HIV/AIDS  in the African immigrant and Black community. Distinguished people have attended the event at a local, national and international level, including Mr. Wafo Pierre, CEO/Founder of Enfant Joyeuse du Cameroon that made a trip to all these events from Cameroon.

Since the inception of the campaign in 2008, African Hope Committee Campaign “ Silence is not an Option”  has had a significant, impact towards positively changing the  behavior and attitudes of African and Black minority communities. Our HIV/AIDS programs and services are dedicated to promoting an affirmative affect on community revitalization by eliminating negative cultural barriers, stigmas and taboos and  advancing economic and social equality by engaging African immigrant women and young girls  in every aspect of their communities and providing leadership skills; raising HIV/AIDS awareness, treatment and prevention in the African immigrant community and promoting collaboration and alliance among all sectors of the community ( health institutions, educational institutions, businesses, legislative, faith-based and community organizations, and policymakers) at the local, national and international levels.

HIV/AIDS has touched you personally. Can you tell us more about that?

When it comes to how Africans view HIV/AIDS, it is obvious that the majorities fall in denial, fear, illness, disease and death.  What most Africans do not see, are the great numbers of individuals infected with the HIV virus, living their full lives today! The African community still cannot view the ability of individuals to have a positive impact and that they have created positive attitude and wellness just by using every available means and resources to combat the HIV virus.

Contrary to the Gay community, at the beginning when HIV first hit the gay community, there was no treatment, then the Gay community went into “action” creating campaigns and sought out alternative therapies and created networks and coalitions. A network for positive living and wellness!

Being infected with HIV does not mean instant illness OR instant death.  Others have gone on living their lives, never having any sign of HIV/AIDS related opportunistic infections, illness or disease. Some, although they test positive, there has never been any virus replicated in their body or progression of the disease. However, this mental behavior in handling the illness was never the proper way to combat the disease.

This is what happened to my aunt, cousin and some of our clients. They never talked and discussed about the disease with their families, husbands, children or friends until it took drastic effects. My little aunt after being diagnosed with the disease began the treatment regiment, maybe did not understand the treatment and also did not adhere to it. Adding to financial barriers to support the medications or to seek other treatments that came along with the disease especially when it was not properly managed. And the worst is that some, including my cousin and our client, they completely refused to take the medications. My cousin passed away 2 years ago in Cameroon when I have visited the family,  living a new born behind her. One cannot describe her conditions.

That picture carries me everywhere and has stayed in my mind and on that day, I pledged after  I left the country that I will live to speak and increase HIV/AIDS Awareness and break the silence in the African community. The sadness of all this is that,  she never had the chance to carry and touch the baby after birth. My little aunt passed away while she was 6 months pregnant. I remember I had just spoke to her on the phone and she was ready to get tuberculosis treatment on that day. Africans must begin to develop dialogues and talk about HIV/AIDS to help break the silence and therefore save people lives. The African community does not engage in conversion toward increasing awareness about HIV/AIDS. Through our Umoja Conference Calls, women can engage in other topics and share all their pain. We had a Connference call on Depression, But you can hear women express their feelings, their abuse and emotion when we HIV/AIDS Topic was scheduled, few women joined the call and barery engaged in the conversation. It’s really a  call for African Hope Committee to continue the campaign “ Silence is not an Option” to raise awareness within the African community and the Black community in general and raise funds that will help resume the Umoja conference call, education and information on HIV/AIDS.

The fear associated with HIV/AIDS continues to keep the African community in the dark. Many fear losing their family, friends, home and job, causing people to conceal the fact they have been infected or affected by HIV. Most often when individuals die from HIV related illness or AIDS in the African community, the funeral announcements will rarely or never say HIV/AIDS was the cause, but use heart disease, cancer or any other concealment.

How can we then tell the real number of HIV related deaths in the African community here and abroad? I believe that science, pharmaceutical companies, the medical profession and government agencies, have all but ignored much of what Africans living with HIV/AIDS have to say, which is a major contribution in the understanding of this virus. Resources must  be once again be made toward creating awareness, campaigns, education and information about HIV/AIDS.  As a Public Health educator working in health awareness and prevention, I  can say that prevention is key to bring changes and transform a community.

Most HIV/AIDS funding toward education, information and campaign was cu and is cut drastically. They all have been shifted toward major treatments, nutrition and other clinical research. sadly, this number is now going up significantly and this was announced last year by clinicians and Doctors at State Senator Bill Perkins Campaign “ Together We Can End Aids Now” Use Protection.

Africans need to understand HIV and let go of the fear, each person must  take part in a global prevention strategy.

We need to put money back into prevention and wellness!

We must not stop from our efforts in safe sex education, prevention, and research. Letting go of the fear, we can all talk to our family and friends and freely discuss our personal lives. There is more power in people knowing the truth, than there ever was in the fear and hiding!

How can members of the public contribute to the Silence is Not An Option African Hope Committee campaign?

Members of the public can make their contributions through AHC’s website on paypal at www.afriquehope.org or through our Fundanything Media Campaign and you can find the link on the website or simply by sending your contributions to African Hope Committee, Inc at 441 Convent Avenue, Suite 4D, New York, NY 10031.

The public contributions to “ Silence is not an Option” African Hope Committee Campaign will help the organization to create mass mailing, engage in social media to reach thousands of people, create post cards, posters and host community forum, travel nationwide to reach African Immigrants dying right here in this country where the medicine is so advance in treating the disease and finally host our first annual Dance-A-Thon to bring over 500 persons in one full day as well as helping to raise more funds to help create a huge awareness about the disease. The public financial contributions will help with media coverage of HIV/AIDS and help tremendously in the fight to educate Africans and the Black community on the disease. “ Reaching women and young girls” The media campaign will help decrease the spread of HIV by promoting safe sex practices; not just abstinence, prenatal HIV testing, and safe drug use. We also hope the media campaign will also dispelled a lot of myths about how you can get HIV, like being able to catch it from a toilet seat, a notion that the community has or eating with the infected person.

We hope to reach local, national and international newspapers and radios to help promote “ Silence is not an Option” campaign, which will help breaks silence in the African community. AHC has played a major role in the past  in dispelling the myths about HIV/AIDS through our annual health summit and now it is through the campaign that we are planning to continue the fight. Join African Hope Committee’s facebook at “ afrique hope” and visitwww.afriquehope.org.

Guide to Immigration to Australia