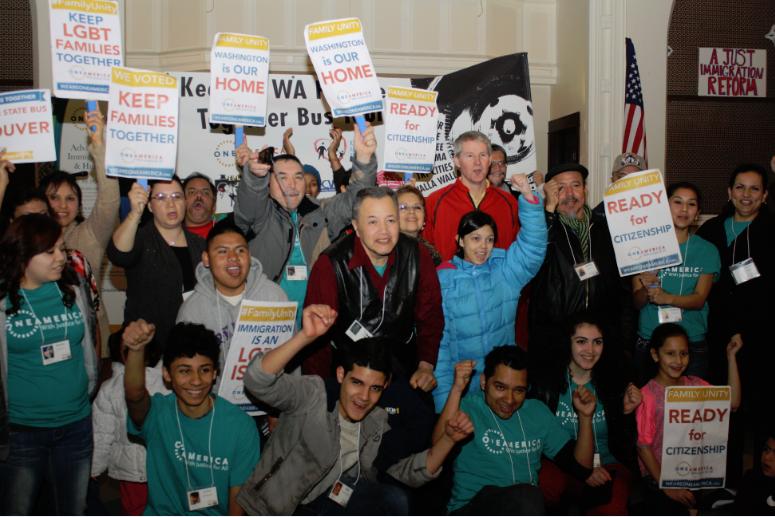 The Gang of Eight’s immigration reform legislation has come under further examination. 300 amendments to the 844 page bill have been proposed by the Senate Judiciary Committee. The most ambitious goals of some of the amendments were to dismember the provisions in the bill for creating a path to citizenship for undocumented immigrants.

However, the Senate Judiciary Committee has approved the legislation that provided a path to citizenship to millions of undocumented immigrants and its refugee and asylum provisions have remained virtually intact. With a vote of 13-5 in favor, the bill has been cleared for a Senate debate.

The original legislation that was put forth by the Gang of Eight seeks to expand legal immigration over a period of 10 years, increase border security, and provide a path to citizenship to the 11 million undocumented immigrants in the country. This last provision in particular has gained the support of many civil rights and social justice organizations; although some have expressed opposition to the length of time undocumented immigrants must wait before applying for citizenship, which is proposed to be 13 years.

OneAmerica is among those organizations who have expressed this opinion. OneAmerica was founded immediately after 9/11 to address the backlash against immigrant communities of color which included Muslims, South Asians, Arab Americans and East Africans in the United States. Nearly 12 years on, and OneAmerica has expanded to become the largest immigrant advocacy organization in the state of Washington. It also plays a major role in national coalitions within the due process and immigrant rights arenas.

The following is an interview conducted by laws.com with OneAmerica Executive Director Rich Stolz on his organization’s stance on the current immigration reform bill and the work of his organization in the realm of immigrant rights.

What are OneAmerica’s views on the immigration reform bill being debated in the Senate?

The Border Security, Economic Opportunity and Immigration Modernization Act (S.744) is a compromise bill.  It includes a road map to citizenship, but the path is long (at least 13 years from the point when one can register for legal status), and includes some obstacles, like income and employment requirements, that should be removed.  It reduces visa backlogs that currently keep families apart for decades, but it replaces the current family and employment visa systems with a new merit based system that will disadvantage some family members in the future.  It includes a historic agreement between business and labor interests on future worker visas.  While less than perfect, it is an important, bipartisan bill that has a strong chance at becoming law.  And there is tremendous support for it.  This is an opportunity we this country must seize, while the opportunity is there.

What are some of the key changes you would like to see happen to our country’s immigration policy?

This year offers an historic opportunity to repair our broken immigration system thanks largely to the huge role Latino, Asian, and immigrant voters played last November in re-electing President Obama and candidates who support comprehensive, commonsense, compassionate immigration reform.  We will use every opportunity to tell our Members of Congress to “Remember November.”

The Senate bill has elements to both support and oppose and OneAmerica is working with our members and allies to ensure that the end result is a strong bill that represents our values by creating clear a pathway to citizenship and keeping families together.  When it comes to abusive border and detention systems, we must ensure accountability, humane treatment, and due process.  In one victory, OneAmerica and our allies within the Northern Border Coalition successfully fought to have the Senate Judiciary Committee adopt a ‘sensitive locations policy’ that would restrict how immigration enforcement agents patrol courts, schools, hospitals, and other community institutions.

In general, OneAmerica supports the agreement that has resulted from negotiations between labor and business interests put forth by the Senate ‘Gang of Eight’.  We have respect for the painstaking negotiations that have led to this agreement, and oppose efforts that would undermine broad support for the legislation.  However, as the bill moves forward, the Senate must ensure that workers who are under non-immigrant visa programs enjoy the full worker protections that everyone else does, that non-immigrant visa programs do not contribute to abuses by unscrupulous recruiters or employers whose practices contribute to human trafficking, and that the bill respects the role of women workers by ensuring that they have the ability to contribute to our nation.

The assertion that immigrants are only a drain is flat out wrong.  Undocumented immigrants are making important contributions to the economy as workers and as taxpayers.  Their presence – and their spending – actually helps to grow the economy, and there’s no evidence that undocumented immigrants are taking jobs that native born workers are scrambling to fill.  Let’s also recall that we’re talking about workers and families that have been here for years.  Bringing these workers out of the underground economy so that they are not easily exploited, will boost their earning power and the wages and working conditions of documented workers, and the economy overall.  It’s time to stop repeating the arguments that were used against the Germans and Swedes 200 years ago and the Irish, Italians and Chinese a hundred years ago, and look at how the economy really works.

What are some of the accomplishments of OneAmerica?

OneAmerica was created to respond to the anti-immigrant backlash that followed the 9-11 terrorist attacks.  At that time, people were lashing out at immigrants who were as American as anyone because of the color of their skin, their dress or religious beliefs, and we were called Hate Free Zone.  We’ve built a broad coalition of communities across Washington State, and have helped to launch national coalitions that have pressed the case against racial and religious profiling.

Today, while remaining true to that multi-ethnic focus on civil liberties, OneAmerica is now at the forefront of efforts to help immigrants integrate into society through citizenship, civics, innovative English language learning programs and financial literacy.  We are also making strides to ensure better representation of immigrant and refugee communities in government, including successful efforts to influence legislative re-districting and running voter registration programs across Washington State.  We’ve also supported efforts across school districts in King County, Washington to improve strategies to close the opportunity gap for the children of immigrants and refugees in our school systems.

What does OneAmerica have planned for the future?

In one year’s time, I hope we’ll be in the final planning stages of a massive effort to help hundreds of thousands of immigrants legalize their status following the enactment of a federal immigration reform bill.  Immigrants and refugees will continue to struggle with our immigration system: while the bill may improve some aspects of immigration law, other aspects of the law will only get more complicated, and in some cases more punitive.  We’ll continue to ensure that immigrant and refugee communities have a voice in these ongoing efforts.  While a tremendous milestone, a comprehensive immigration reform bill is not the end of the fight for immigrant and refugee rights.

At the same time, I see OneAmerica bringing to bear our experience and base of support on other issues less specific to immigrant status that are vitally important to immigrant and refugee communities.  For example, education policy, economic policy, and economic development strategies that consistently fail to take into consideration the voices and needs of these communities who continue to be underrepresented in government and in the policy and decision-making processes that impact their lives.

Do You Know About the State Department?