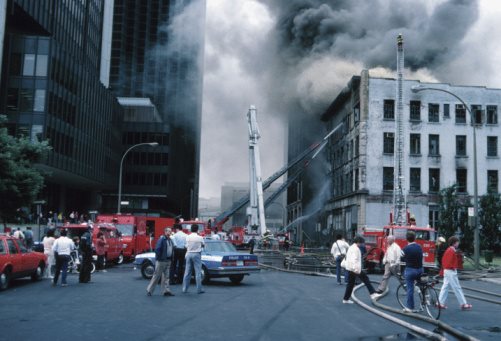 Certain landmark natural disasterrefugeesHurricane Katrina Other times, though, the events of a natural disaster will set a nation or territory back, and ultimately, cause it to lose out on opportunities to grow in comparison to another entity. The city of San Francisco suffered this fate when it came to the earthquake of 1906, one of the deadliest natural disasters in American history, and the greatest loss of life based on a natural disaster in Californian history.
The earthquake, a seismic event occurring along the San Andreas Fault, was of a magnitude over seven, and was particularly damaging for the fact that so many fires erupted from ignition of the broken gas lines, and even more were created by the attempts of firefighters to use dynamite to level buildings (ironically, to try to control the string of flammable material) and the absence of needed water conduits after ruptures in the mains. Over three quarters of the city was effectively destroyed, and obviously, there is the aforementioned casualty rate to consider, but perhaps the greatest loss of the city was in terms of long-term economics.
The percentage of displaced refugees, who were in fact evacuees, from the 1906 earthquake comprised more than fifty percent of the city, and given the choice, a good deal of those displaced refugee evacuees relocated to other California cities.
In addition, displaced refugee housing was put up subsequent to the extinction of the fires by the Army, providing refugee for tens of thousands of displaced refugees. To bring the point back, though, the damage had been done to San Francisco, literally and figuratively. With the displaced refugee efflux from the ruins of the city, its livelihood and growth was stunted. To be sure, it would have to take a few steps backward to rebuild and move forward. In the interim, and despite the fact the city has recovered to developed an image that gives off vibes of cultural significance, it would be Los Angeles that would become the center of commerce in the West.
However, the silver lining of the story is that San Francisco was rebuilt fairly quickly after the quake, and while there were so many displaced refugees from the utter destruction of the buildings, the idea that the federal government would come to the aid of its displaced refugee citizens with subsidized housing was vaguely progressive in spite of being a relief effort. Plus, even if Los Angeles ascended to great heights in the unofficial race to be the biggest city, the earthquake proverbially washed away San Francisco’s corruption and essentially started it with a clean slate.

What was the Balkans War?